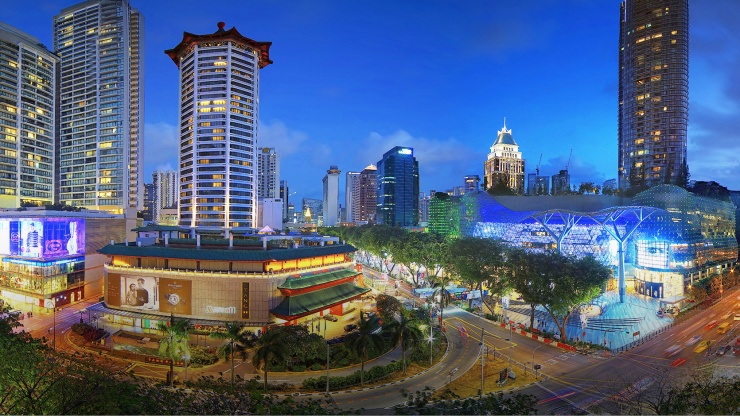 Orchard Road, often known colloquially as Orchard, is a major 2.5 km (1.6 mi)–long road in the Central Area of Singapore.A famous tourist attraction, it is an upscale shopping area of Singapore, with numerous internationally renowned department stores, restaurants and coffeehouses located in its vicinity.

The Orchard Planning Area is a planning area as specified by the Urban Redevelopment Authority. It is part of the Central Area located within the Central Region. Orchard is bordered by Newton in the east and north, Tanglin in the west, River Valley in the south and Museum to the southeast.

After more than a century as a two-way thoroughfare, Orchard Road became a one-way street in 1974.[6] The ever-lively street starts at the junction with Orange Grove Road which is the location of the Orchard Hotel. It then stretches southeast across the Scotts Road–Paterson Hill junction, Orchard MRT station, Bideford Road, Somerset MRT station, Central Expressway, Dhoby Ghaut MRT station, and ends at the junction with Handy Road (just before Prinsep Street), where it becomes Bras Basah Road. It has an extensive underground infrastructure, including underground pedestrian walkways between the malls running underneath the street and other streets in the vicinity. The numbers begin at Handy Road and end at Orange Grove Road.

At Orchard Road’s eastern end is official residence and office of the President of Singapore, the Istana, marked with Nibong palms and a plaque that reads, “As the nibong is a mangrove palm, this site must have once been a mangrove swamp.”

On the western side of Orchard Road is the Singapore Botanic Gardens, the only tropical garden in the world that’s a UNESCO World Heritage Site.

About halfway down Orchard Road are Cairnhill and Emerald Hill which are mainly private residential areas. Next to Emerald Hill is Centrepoint, which houses the supermarket Cold Storage, the oldest surviving business establishment in the area. Amber Mansions, one of the earliest apartment blocks in Singapore which was built around the turn of the 20th century, was torn down in the 1980s to make way for the Dhoby Ghaut MRT station.

Elsewhere just off Orchard Road is Scotts Road. Scotts Shopping Centre housed Singapore’s first food court, which sat below the Ascott Singapore. It was torn down in June 2007 to make way for Scotts Square.